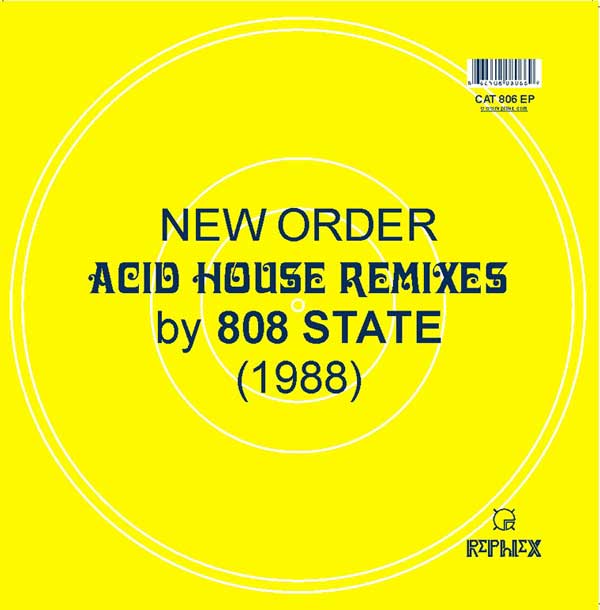 Okay, I'm not ready to give up the whole acid house focus just yet, it's not completely out of my bloodstream despite drinking lots of water and listening to a steady diet of bland, sexless indie rock. I have a few more things that I want to get to this week, a nice mix of stuff from Chicago and the UK, you'll love it.

One of the main goals is to introduce the music of 808 State, an important group in the evolution of that sound, an important player at that pivotal moment in the late 80s, early 90s when this acid house sound was on the charts. I'm a really big fan of this release, the Acid House Mixes by 808 State, where the producers took on two of the biggest and best tracks from New Order. These were originally done in 1988 by the original line-up of 808 State, which included Gerald Simpson, otherwise known as A Guy Called Gerald. They were never intended for release, but Rephlex pressed them up a few years back in a limited pressing. I guess you could called this more of a proto-acid sound, taking the more rock sound of New Order and others and adding in the squelchy basslines that would be a hallmark of the next few years. Interestingly, this "Blue Monday (So Hot mix)" was the unofficial anthem at Jon Da Silva's Hot night at the Hacienda in 1988. This perfectly sums up where these songs stand, a bridge which helped take the UK from the Factory days to the rave world.

Just to be clear, these aren't just historical curiousities, they sound effing rad! I love the "Blue Monday" mix, a really great take on a classic that you've probably heard to death if you've ever gone to a club. The original seaps through occasionally, but for the most part this is something new and original.
Posted by Jack at 5:07 PM