It's Friday, it's a massive weekend for parties, no work or school, it's time to be happy and celebrate. I can't think of a band that puts me in a better mood than Hot Chip. For real, they are the band that I play for everyone when I want them to hear great music, like there's no way no one couldn't love them. It's such perfect music, it just makes me wanna sit in a park and hold hands with my girl and think about how bright my future is. Since I'm going to die alone and poor, you know that this is some seriously good shit.

The main draw above is the newish remix of the star of the moment, Amy Winehouse.

-The event of the night is a battle for the future of California, as the best LA and SF DJs fight it out for supremacy. All of Pound for Pound's West Coast favorites are in the house, Sleazemore and Audrock for the Yay Area and Daniel Le Disko and Paparazzi from the City of Angels. This should really be an amazing night at the 222 Club (222 Hyde@Turk) and further proof that there's no East Coast bias on this blog.

-Damn, big night in San Fran, as the new Modular monthly gets started at Mezzanine (444 Jessie St.) with a bang, as the Radio Soulwax rolls through town. I've been hyping this tour since it's start, so you know the deal. Soulwax Nite Versions live, 2 Many DJs set, Dave P and JDH, Modular DJs, Muscles live, Jefrodisiac and Richie Panic, fun, dancing, the time of your life, happiness.

P.S. It's a huge weekend San Francisco. Prepare yourself.

-I wasn't even going to mention Coachella out of pure jealousy, but I can't be a hater. Everyone should make sure to check out this cool afterparty tonight at the Best Western Date Tree Hotel. The birthday bol Le Castle Vania, LA's Them Jeans and Justin Jay provide the beats, Sarah Morrison hosts and it's at a fucking pool. What more could you need?

-Some dope parties going down in NYC, with the choicest one tonight's FUN at Studio B. French produce Joakim is going to be playing tonight with The Ectoplasmics, making this an essential stop in your night no matter what. Tim Sweeney is the guest DJ, spinning with residents Eamon Harkin and The Bangers.

-Always great to see new parties start up, especially when it involves so many of my favorite DJs in NYC. The Musicbox and Paper TV are starting a monthly party at The Orchard Bar (200 Orchard St.) in the LES. Bands The Beasts of Eden and Locksley play early, but the real fun starts when the dance party starts after. Mr. Stretch Armstrong, Jacques Reneault, Bardl from Bang Gang (!) and the lovely White Dove ladies, Shelly and June D. Hosted by Genevalentine, free booze and giveaways, I think we've got something here. 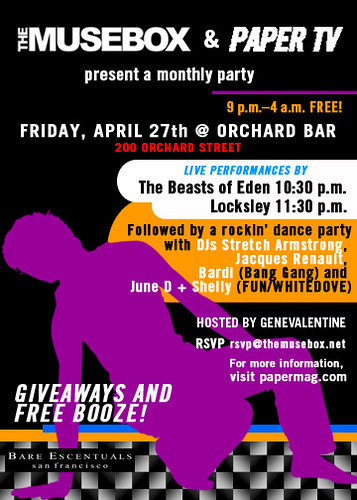 -You know what, you could just make it a Lauren Flax. It's Friday, so it's White Lightning! time at Home Sweet Home, this time with The Heartthrob Boys - Red Foxx, Morgan Louis, Sensitive Hand and Baltimoroder. After that, head to School (105 W. 27th St.) for afterhours madness until 7 AM. No clue what the deal is with that afterhours jawn, but it's not like anything bad ever happens when you extend the night very late. Right?

-The Pound for Pound map continues to expand, as we're setting up an outpost in Minneapolis now. Ian Hixxx comes in from Chicago to join with Sovietpanda, naughty wood and Jonathan Ackerman for a night of dance music at Foundation (10 S. 5th St.). We'll have a lot more from the Great North coming up, count on it. 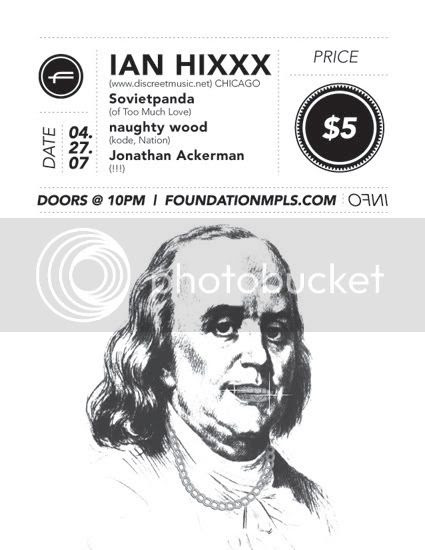 -Finally, I just have to mention the utter world domination that Modular is putting in action tonight. They've got their London weekly at the Ditch Bar (145 Shoreditch High St.) jumping off with Sinden on the decks. Nightmoves, Tramp!, Fact DJs, Baseball Furies and the Modular DJs are also there to make this a fucking rager.

And in my future home, Paris, the label starts up a new monthly and check the line-up. Like whoa! Herve! Fred Falke! New Young Pony Club! Late of the Pier! Good Shoes! Zut alors! Get to Le Showcase (under the Pont Alexandre III, 8th, Right Bank). Paris, do this, then get me a job and place to live and let's make it happen.