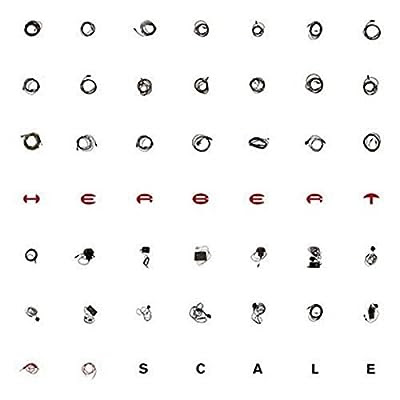 Continuing our look at those working in the disco/house vein currently, I would be remiss to not mention Herbert's new album, Scale. Herbert came to my attention a few years back as someone bringing the avant garde to house music, an anomaly in the increasingly commercial, club-oriented music. The main technique that brought him this attention was his use of the sounds of everyday life and the real world. Known as musique concrete, its practitioners use the sounds of the real world to create their music. In Herbert's case, his sound sources could be anything. He has made an entire album from the sounds of the kitchen, he's created dance tracks from the sound of styrofoam crumpling. I tend to find this style to be more impressive in theory, as it usually doesn't make much impact if the song doesn't work.

Herbert has put together a decent album, which nicely acknowledges the strings and horns roots of disco, unafraid of sounding full, lush and sincere. However, it tends to be too pretty, too perfect throughout. It's odd because Herbert has become more political over the past few years, more willing to put in his music his feelings of despair and disgust at the state of the world. On the second track, "Movers and Shakers," one gets this line, "I just don't know how to bring about your downfall/ Damn fool/ Go figure out/ How those Christian bones/ Can orchestrate/ Shock and awe." Yet, there is no sense of upheaval or static, no anger in the music on the album.

What does stand out is singer Dani Siciliano, who stars on this album. She has a wonderful voice, and really can adapt to any type of song or mood, the next woman in line fore greater attention this year, I hope. The strings and horns are great to hear, as it's nice to hear that minimal isn't the only thing people are playing today. However, as much as it harkens back to the days of disco, it doesn't seem to have the same ecstatic quality, the music never really lets loose. I think that gets to the heart of my problem with this album; it suffers from too much thinking, too much thinking is needed to enjoy this. I know that this may sound like anti-intellectual sentiment, and maybe it is. But, there is something to be said for the immediacy, the abandon that great music has, especially the best of dance music. My favorite track on the album, "Down," achieves this, bringing a dirty sexuality to the mix. "Something Isn't Right" is quite good, as catchy and hypnotic as a political song could ever hope to be.

Jess Harvell of Pitchfork has the complete opposite opinion, praising it as one of the best albums of the year. Silence Is A Rhythm Too, Analog Giant, Macktronic, marathonpacks, scissorkicks and Green Pea-ness all have spoken and uploaded about this album. Go here and buy the album and see which side you come down on.

-I wasted a few hours watching the U.S. get their asses handed to them by the Czech Republic, 3-0. Playing in the "Group of Death," this is a devastating start and means it will take a miracle to advance to the second round. The team played awfully, as no one showed up or even looked like they gave a shit. To erase the memories of this game, watch this video of Holland coach Marco Van Basten's greatest goals. Special attention has to be paid to this goal in the '88 European Championships, arguably the greatest goal of all-time. I might put my vote in for this one he scored with Ajax.

-It's been a good time lately for Pee Wee Herman fans. First, as we mentioned last week, Adult Swim will be re-running Pee Wee's Playhouse nightly, starting next month. Now, we learn that the man behind Pee Wee, the brilliant Paul Reubens, will be starring in the new Raconteurs video for their song "Steady, As She Goes."

-Remember that song that was playing during Marissa's death scene in The OC? It was a new version of "Hallelujah," sung by Imogen Heap. m3 online has that version, along with the original by Leonard Cohen and Jeff Buckley's version. Add to that a few extra Heap tracks, and you've got yourself a great post. Also, make sure to head over to My Old Kentucky Home and grab the various cover versions of "Hallelujah" Dodge compiled. You'd be amazed at how many versions there are of one of the greatest songs of all-time. I don't know if anyone could top Cohen or Buckley, though.
Posted by Jack at 7:22 PM

Thanks for the link. Like the music I am seeing on your site. I'm linking you up. Keep up all the great work.